This page contains graphic content that can shock, offend and upset.

News Releases for this Case: French:

Mandate of the SIU

The Special Investigations Unit is a civilian law enforcement agency that investigates incidents involving an official where there has been death, serious injury, the discharge of a firearm at a person or an allegation of sexual assault. Under the Special Investigations Unit Act, 2019 (SIU Act), officials are defined as police officers, special constables of the Niagara Parks Commission and peace officers under the Legislative Assembly Act. The SIU’s jurisdiction covers more than 50 municipal, regional and provincial police services across Ontario.

Under the SIU Act, the Director of the SIU must determine based on the evidence gathered in an investigation whether there are reasonable grounds to believe that a criminal offence was committed. If such grounds exist, the Director has the authority to lay a criminal charge against the official. Alternatively, in cases where no reasonable grounds exist, the Director cannot lay charges. Where no charges are laid, a report of the investigation is prepared and released publicly, except in the case of reports dealing with allegations of sexual assault, in which case the SIU Director may consult with the affected person and exercise a discretion to not publicly release the report having regard to the affected person’s privacy interests.

Pursuant to this legislation, any information related to the personal health of identifiable individuals is not included.

Other proceedings, processes, and investigations

Information may also have been excluded from this report because its release could undermine the integrity of other proceedings involving the same incident, such as criminal proceedings, coroner’s inquests, other public proceedings and/or other law enforcement investigations.

Pursuant to section 15 of the SIU Act, the SIU may investigate the conduct of officials, be they police officers, special constables of the Niagara Parks Commission or peace officers under the Legislative Assembly Act, that may have resulted in death, serious injury, sexual assault or the discharge of a firearm at a person.

A person sustains a “serious injury” for purposes of the SIU’s jurisdiction if they: sustain an injury as a result of which they are admitted to hospital; suffer a fracture to the skull, or to a limb, rib or vertebra; suffer burns to a significant proportion of their body; lose any portion of their body; or, as a result of an injury, experience a loss of vision or hearing.

In addition, a “serious injury” means any other injury sustained by a person that is likely to interfere with the person’s health or comfort and is not transient or trifling in nature.

This report relates to the SIU’s investigation into the death of a 24-year-old man (the “Complainant”).

Notification of the SIU

On September 3, 2021 at 5:35 p.m., a TPS officer – the Subject Official (SO) - was driving a marked scout car westbound on College Street and attempting to make a left-hand turn onto southbound University Avenue. The officer waited until the traffic signal turned red before turning. A motorcyclist, tentatively identified as someone from Waterloo, believed to be travelling eastbound on College Street, struck the police vehicle as it went through the intersection. The motorcyclist was taken to St. Michael’s Hospital by paramedics, and was in surgery.

[Note : An affected person (complainant) is an individual who was involved in some form of interaction with an official or officials, during the course of which the individual sustained serious injury, died, was reported to have been sexually assaulted, or was shot at by a firearm discharged by an official.]

SO Interviewed, and notes received and reviewed

The subject official was interviewed on December 9, 2021.

[Note : A subject official is an official (whether a police officer, a special constable of the Niagara Parks Commission or a peace officer with the Legislative Protective Service) whose conduct appears, in the opinion of the SIU Director, to have been a cause of the incident under investigation.

Subject officials are invited, but cannot be legally compelled, to present themselves for an interview with the SIU and they do not have to submit their notes to the SIU pursuant to the SIU Act.]

The witness officials were interviewed on September 29, 2021.

[Note : A witness official is an official (whether a police officer, a special constable of the Niagara Parks Commission or a peace officer with the Legislative Protective Service) who, in the opinion of the SIU Director, is involved in the incident under investigation but is not a subject official in relation to the incident.

Upon request by the SIU, witness officials are under a legal obligation pursuant to the SIU Act to submit to interviews with SIU investigators and answer all reasonable questions. The SIU is also entitled to a copy of their notes.]

At 10:40 p.m., an SIU Forensic Investigator (FI) arrived at the scene and met with TPS Traffic Services Officers.

The scene had been properly secured and guarded by TPS Officers.

University Avenue travelled primarily in a north/south direction. It was a six-laned roadway with a centre median. There were three lanes travelling in either direction. The roadway surface was level and in good condition, and pavement markings were clear and visible.

College Street intersected in an east/west direction and was a four-laned roadway. The roadway surface was level and in good condition, and pavement markings were clear and visible. The intersection was controlled by traffic lighting that appeared functional.

Vehicle 1 was a black 2016 Honda R5C motorcycle. This vehicle was oriented in a southwest direction lying on its right side in the 2nd southbound lane of University Avenue in the intersection. There was extensive front-end collision damage to this vehicle. There was a tire mark nearby that indicated this vehicle had been travelling east on College Street when entering the intersection. 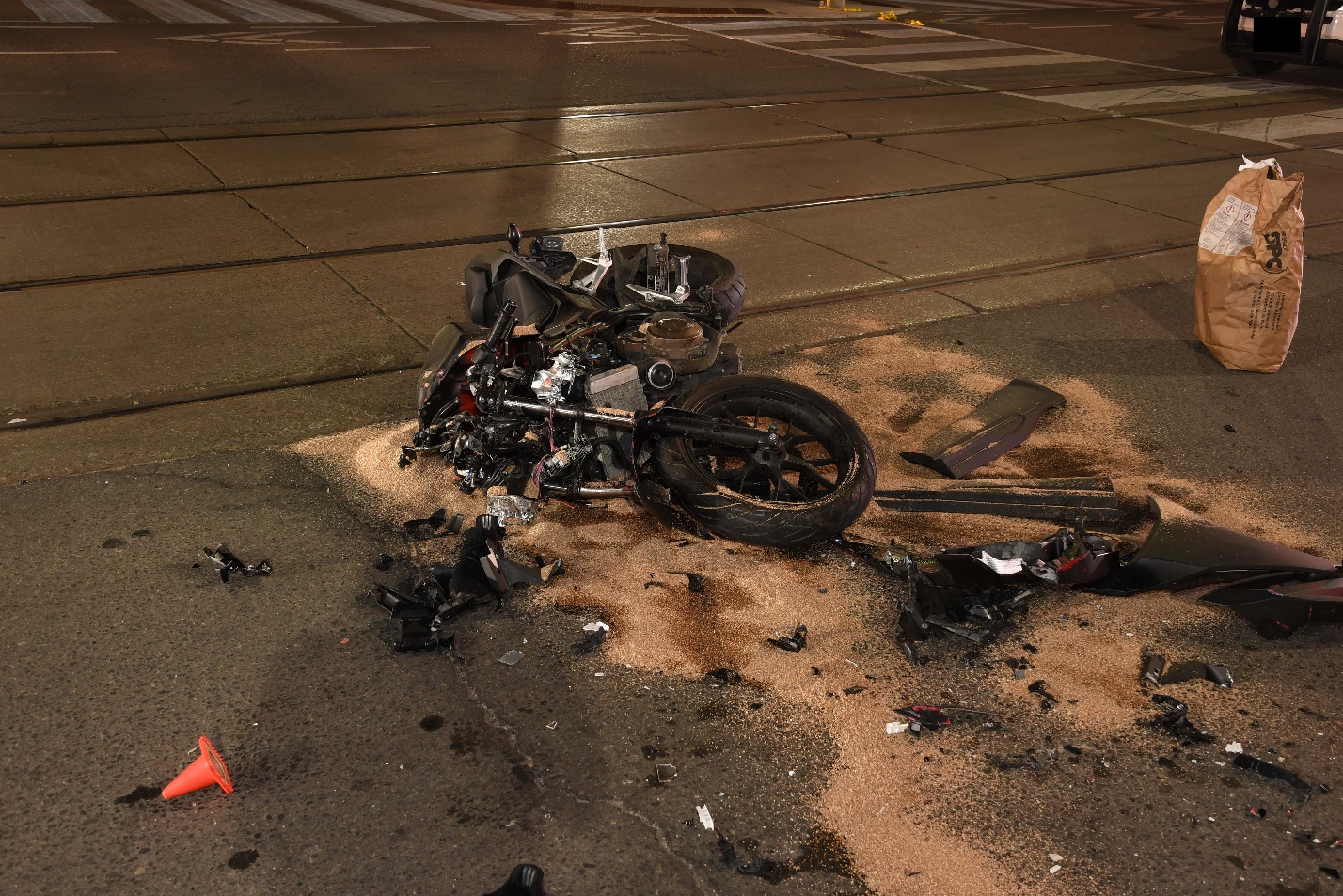 Vehicle 2 was a grey/white 2020 Ford Explorer (a TPS unit). This vehicle was oriented south on University Avenue south of the intersection in the passing southbound lane. There was collision damage to the passenger side of this vehicle and front wheel. 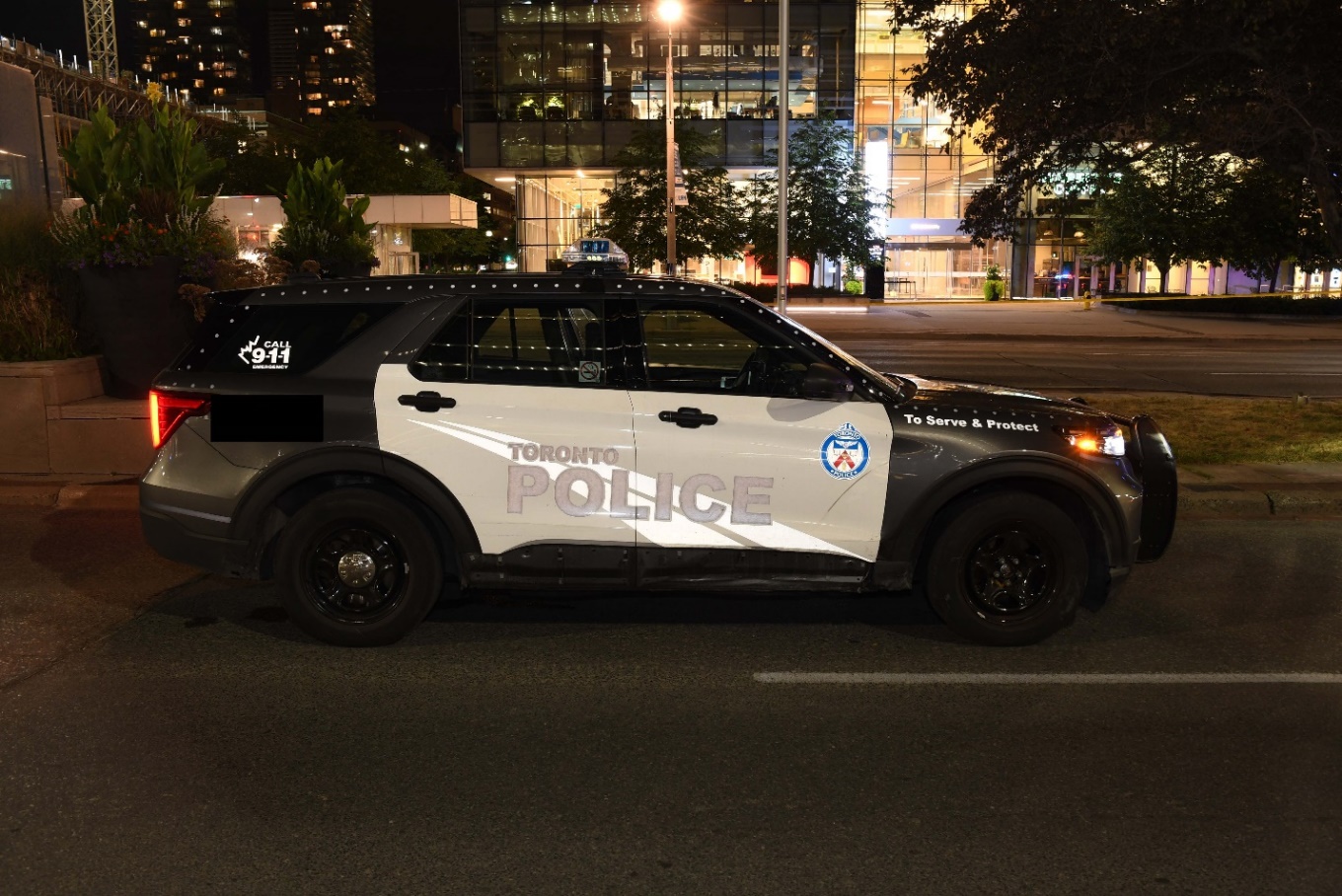 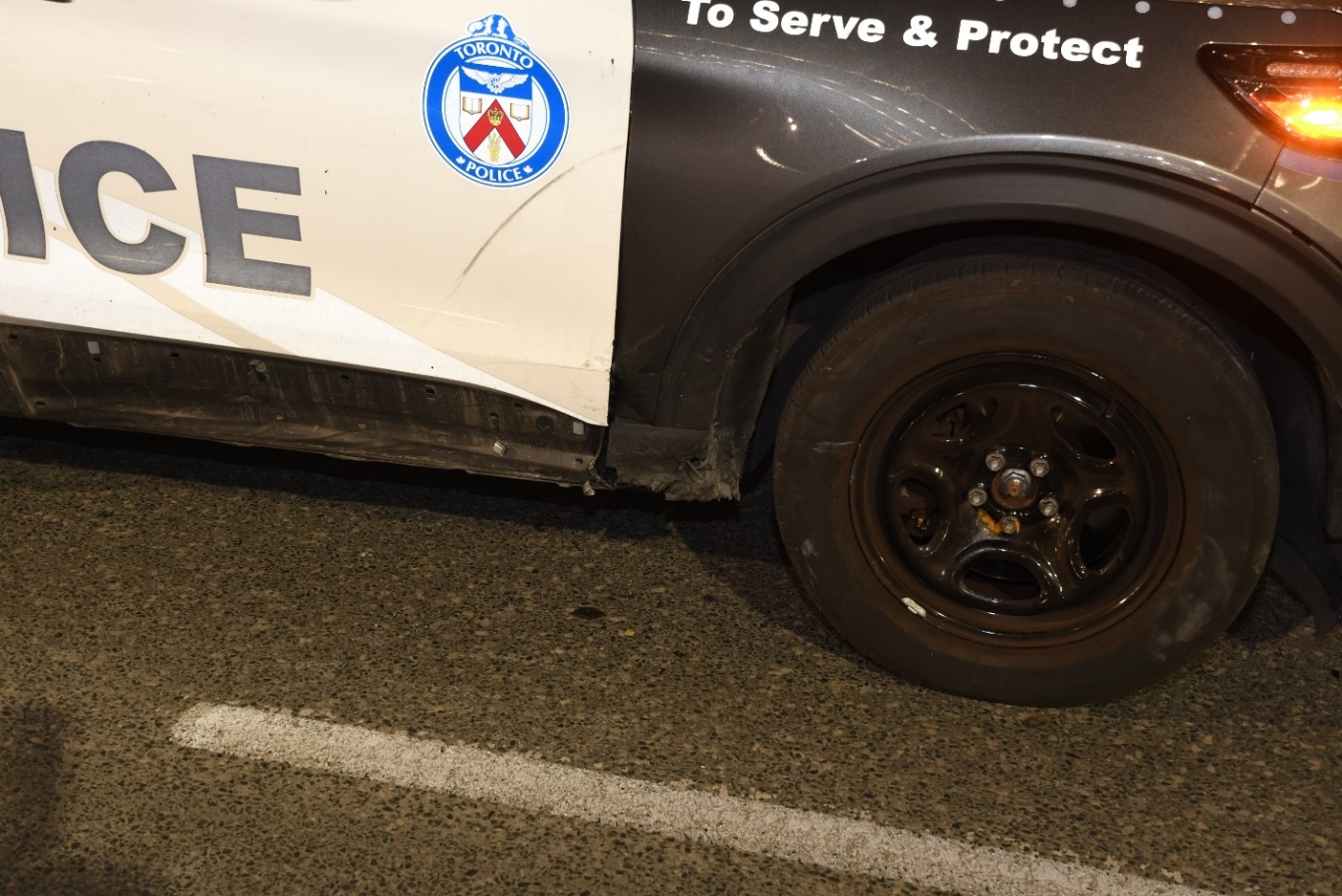 Figure 3 - Close-up of the collision damage to the SO's TPS Ford Explorer.

Vehicle 3 was a TTC streetcar. This vehicle was oriented east on the eastbound rails of College Street immediately west of the intersection. There was no collision damage to this vehicle.

Vehicle 4 was a TPS unit. This vehicle was placed on the scene post incident by a TPS officer.

The scene was photographed and mapped by the SIU. 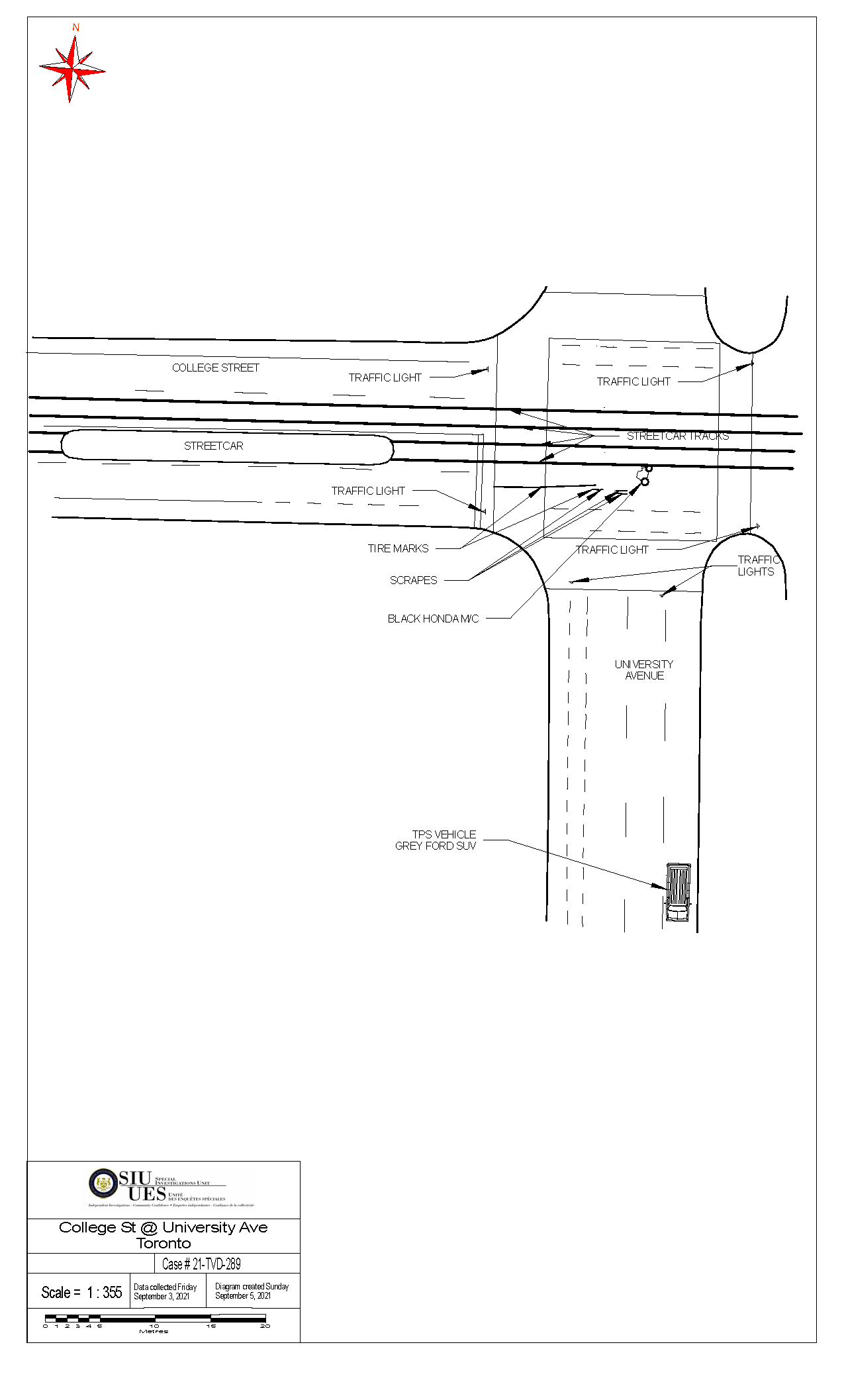 None of the views captured the collision.

On September 15, 2021, the TPS provided the SIU with ICCS footage from the police vehicle operated by the SO during the collision. The following is a summary of the salient portions of the videos. 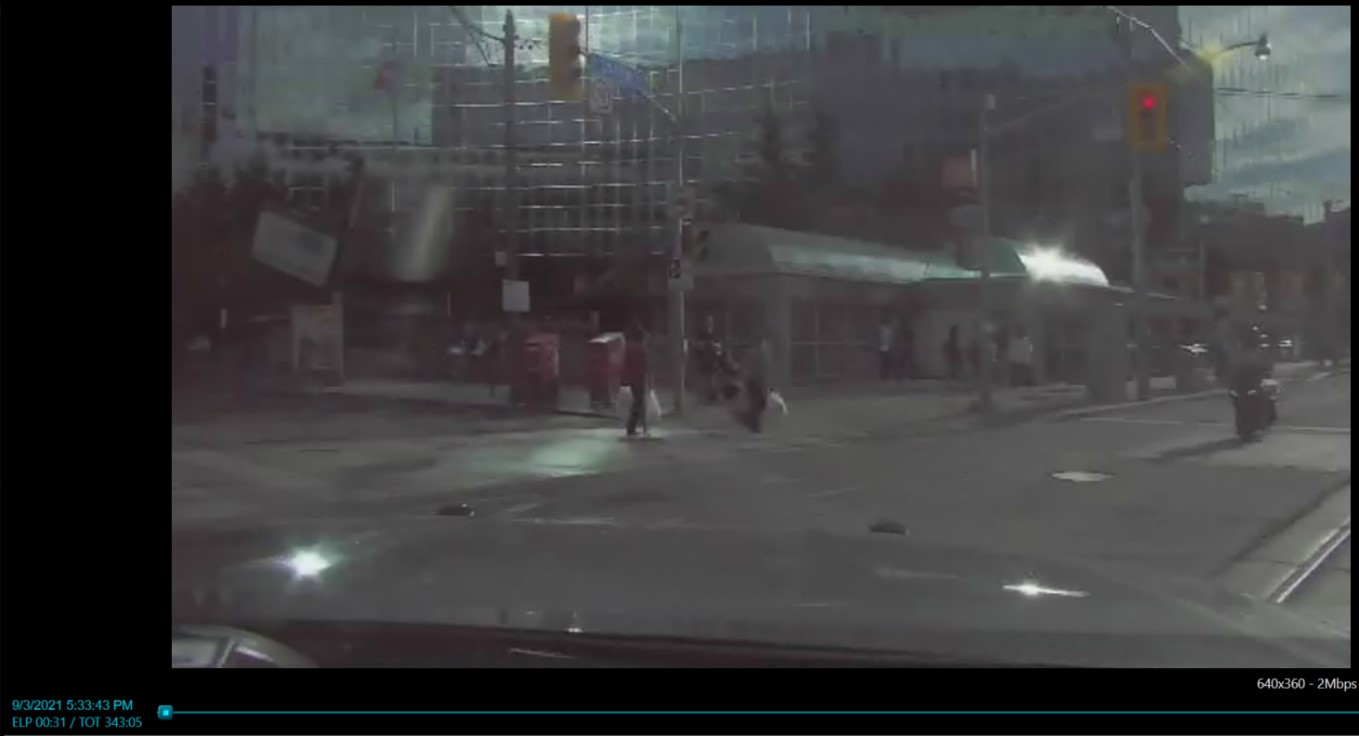 Figure 4 - Screenshot from the SO's ICCS video depicting the moment the Complainant entered the intersection.

At 5:35:07 p.m., the SO radios that a motorcycle has hit his vehicle and that the motorcyclist may not be breathing.

The SIU obtained two video files from video cameras positioned at the Legislative Assembly of Ontario building. The videos captured the same incident from slightly different angles. The salient portions of the videos are as follows.

The SIU obtained and reviewed the following records from the LPS and the TPS:

Materials Obtained from Other Sources

The material events in question are clear on the evidence collected by the SIU and may be briefly summarized.

At about 5:30 p.m. of September 3, 2021, the SO was in his cruiser – a marked TPS SUV – en route to relieve a fellow officer at St. Michael’s Hospital. He was travelling west on College Street intending to make a left-hand turn onto University Avenue. The officer entered the intersection on a green light, travelled past the northbound lanes of University Avenue, and started into his turn as the light turned to red.

At about the same time, the Complainant was operating a motorcycle eastward on College Street approaching University Avenue. Travelling in the curb lane past a streetcar stopped in the passing lane, the Complainant entered the intersection on a red light.

The SO had crossed the eastbound passing lane and was into the curb lane when his cruiser’s passenger side was struck by the Complainant’s motorcycle.

Paramedics and firefighters arrived at the intersection, and the Complainant was transported to hospital.

On September 4, 2021, the Complainant died from serious injuries he suffered the day before in a motor vehicle collision with a TPS cruiser. The driver of the cruiser – the SO – was identified as the subject official for purposes of the ensuing SIU investigation. The investigation is now concluded. On my assessment of the evidence, there are no reasonable grounds to believe that the SO committed a criminal offence in connection with the collision.

The offence that arises for consideration is dangerous driving causing death contrary to section 320.13(3) of the Criminal Code. Simple negligence will not suffice to make out the offence. Rather, what is required, in part, is a marked departure from the level of care that a reasonable person would have exercised in the circumstances. In the instant case, the question is whether there is sufficient evidence to reasonably establish a want of care on the part of the SO that caused or contributed to the Complainant’s death and was sufficiently egregious to attract criminal sanction. In my view, there is not.

The SO bears some responsibility for the collision. Knowing full well that left-hand turns were prohibited at that time, the officer chose to disregard the law and embark on his turn. He was not responding to any emergency at the time, and should have known better than to conduct himself as he did. The SO was also on the phone engaged in a personal conversation with his girlfriend as he approached and entered the intersection. Though perhaps not technically in violation off the rules restricting the use of hand-held communication devices while driving, it is possible the SO was not as focused on the road as he might otherwise have been.

On the other hand, it is important to note that the officer’s approach and attempted turn at the intersection, though prohibited, appear to have been executed with due care and regard for traffic in the vicinity. He entered the intersection lawfully on a green light and was proceeding into his turn as the lights for east and westbound traffic turned red when his cruiser was struck. On this record, though it is perhaps fair to say that the collision would not have occurred but for the SO’s imprudent left-hand turn, it is also fair to observe that he was in no way responsible for the Complainant’s decision to enter the intersection on a red light at speed. In addition, the officer was using his phone ‘hands-free’ at the time – it had been set to speaker mode and was contained in the officer’s vest pocket.


In the final analysis, when the SO’s indiscretions are weighed in the balance with the extenuating considerations, I am satisfied that his conduct falls short of constituting a marked departure from a reasonable standard of care.  Accordingly, there is no basis for proceeding with criminal charges in this case, and the file is closed.
Date: December 30, 2021
Electronically approved by
Joseph Martino
Director
Special Investigations Unit

The signed English original report is authoritative, and any discrepancy between that report and the French and English online versions should be resolved in favour of the original English report.